THis unit is a work in progress; statistics, information & such are subject to change 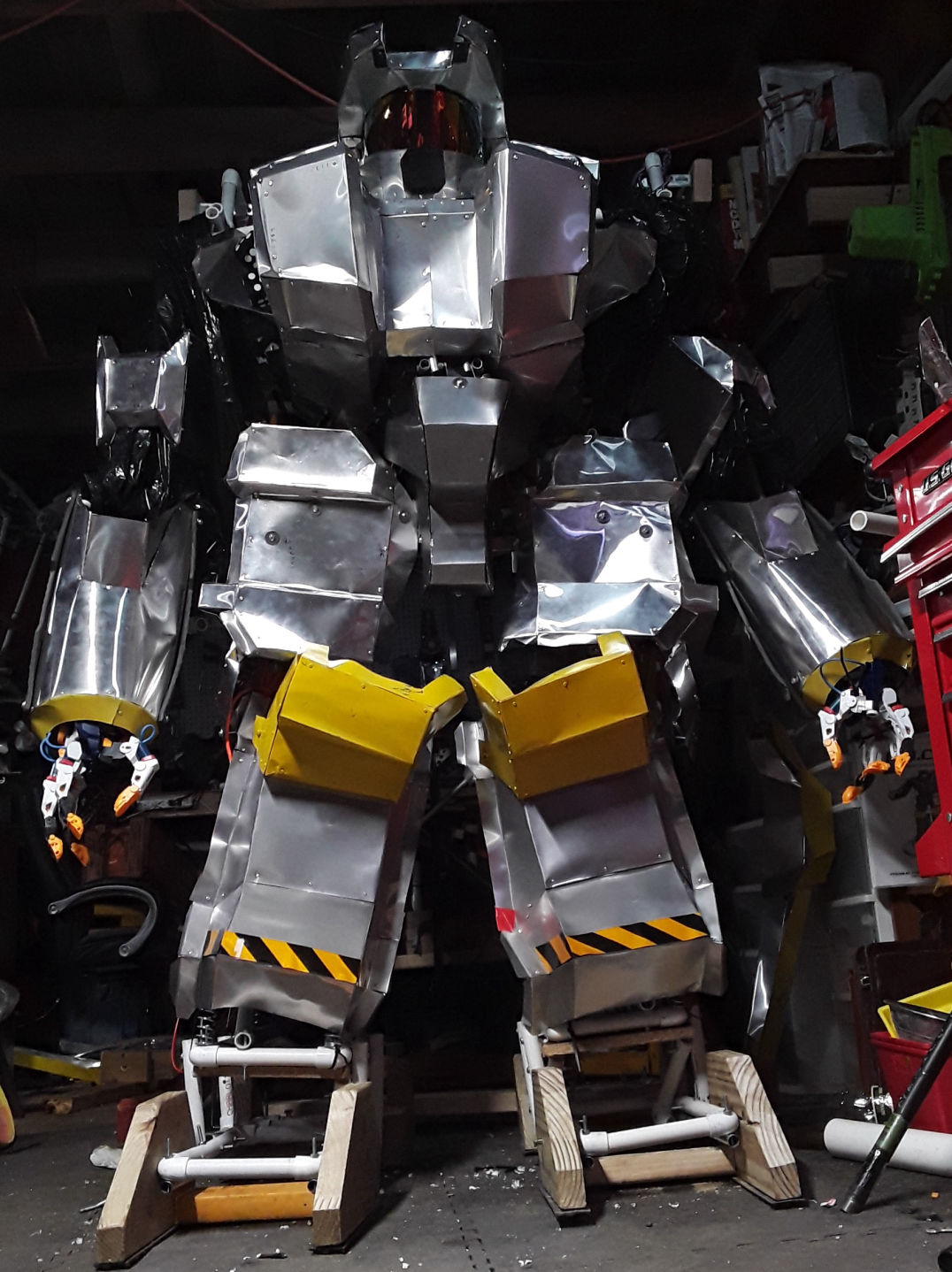 Information:
The Localized Underlying Control Kinetic Integration (LUCKI) Mark I is a Hybrid Active/Passive Powered Armor (HAPPA).  By using simple circuits, the lack of computer controls make it cheaper, more robust and easier to diagnose than other systems.
Electrical linear actuators require little maintenance and are sealed from the elements, and easily swapped out.

The first attempt at walking in the armor 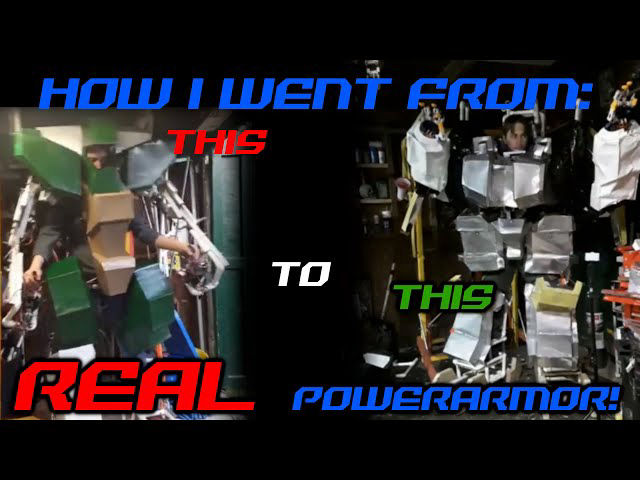 Originally inspired by the OVA "Metal Skin Panic Madox 01"- which featured a fairly realistic power armor- the overhaul process to a configuration with more articulation while sacrificing direct feedback left an opportunity for a newer, more contemporary look.  Taking advantage of the popularity of 343 Studio's Halo Franchise, the armor is based off one of the earlier prototypes of the infamous MJOLNIR armor, simply dubbed the "Prototype Suit" in the episode The Prototype of Halo Legends - a series of shorts by various animators released in 2012.  Later additions to the series would give the armor the name "Hrunting/Yggdrasil".  Ironically, the artist who designed the Madox also designed the suit in The Prototype: Shinji Aramaki.

The control system in this overhaul would later be retrofitted onto MARDUK, the worlds first entry-level giant fighting robot.

A 3d model had to be made from scratch, not only to be lore accurate, but also limited to the physical size of the armor frame.

The first iteration of the powerarmor known as the "Junk Nominal Kinetic Integration" -or JNKI - Power Pants was designed in blender.  With plans for an entirely PVC frame and motorized legs, it would be the harbinger of things to come, for reality of the challenges of motorized legs to be realized.

The first movements of the motors was at 12V, less than 1/3 the current operating voltage.  Such slow movements- while impressive considering the low tech control (a simple DPDT automotive switch) -could not be considered adequate for human walking motion.

However, the control mechanism did bode well for arm movement.  With some galvanized steel conduit, and some scrap furniture-grade square stock, a quick prototype was thrown together and attempted to be worn.  Even at this point the issue with proper joint measurements was apparent, otherwise the arm controller would drift out of the pilot's reach.

Changing to the hybrid

With the challenges of creating a feedback system responsive and dynamic enough to aid in bipedal walking, the focus turned to a passive leg system of bungees and springs so the arm control system could be perfected.  Once an arm control solution was found, it could then be eventually modified for use in walking.

However, further experimentation revealed this would not be possible without further aid than mere 1:1 human control.  Reaction wheels were put on a list for future research.

The first time suiting up

Nothing could compare to the excitement and terror of the first time the suit sealed shut around me.  The constant checks and tests outside of the armor paled in comparison to being actually inside and moving about.
Several issues were discovered right away, such as the arms being capable of moving beyond the operators reach, however since the arms required the operator's touch to move, they couldn't.  However that left the suit experience lacking.

I began the overhaul process, not filming or planning anything in case it failed.  It was a partial success: I was hoping for the pilot's arms to still be in the mech arms, however the measurements for ensuring a proper fit onto the pilot required tolerances I wasn't ready for: I was trying to get a prototype suit built & it didn't have to be perfect.

The idea came to me while watching an anime, and I shortly figured out the McNichol configuration, which is to have the pilot's arms stashed in the torso, with a control stick inside to control the arms.  Somewhat like a walking cockpit.

With a combination of aluminum flashing and paper templates, I attempted to move in the armor.  The parts fell off, the paper became moist & crumbly due to atmospheric humidity (it was winter, after all) and the knees were locked due to transportation out of the basement back in March.

However, the systems worked.

The first time walking in the suit was both exhilarating and troublesome.  There is absolutely no ability to see where the pilot is putting their feet, so one is walking around like a blind man, feeling and hoping nothing is stepped on.
Much of the weight was supported by the elastics & springs in the legs, making the 115lbs of machine feel much lighter.  However, the large feet make walking somewhat troublesome.  It is a small price to pay for not falling over.

I recorded most of the footage in early January and over during the Christmas season, waiting until I had the proper walking sequence to make the video proper.
I even re-recorded the entire narration to be satisfied, and even then...
I go into some of the motivations, inspirations for why I changed the configuration, and how I got the name for the control configuration (named after a character who had a powerarmor with control sticks in the torso).

Nye Mechworks Builds giant robots that anyone can make on a DIY budget!